This award recognizes the State Animal Control Association that best promotes and exemplifies professionalism in the animal care and control field. Factors considered in granting this award include the number of active members, increases in new members, improved quality of animal care and control programs within their state, active sponsors of seminars and training for members, and engaged in NACA sponsored training and events. 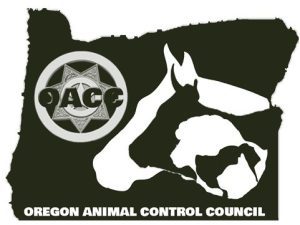 In the past year, the Oregon Animal Control Council has grown its membership numbers from around 10 active members to now boasting over 100 active members between individual and agency memberships. The council has completely revamped their website to not only be much more accessible and easier to use, but also to have a membership function which allows for networking and passing of information amongst professionals within the field much easier. The council is actively reaching out to broaden the members amongst all relevant disciplines in the animal control and care worlds including veterinarians, veterinary social workers, shelter employees and even vetted private rescue entities. OACC membership, specifically that that of their Vice President of Legislation, Lee Bartholomew has remained extremely active to continue to promote much-needed legislation ensuring the welfare of animals as well as the safety of animal control officers and involved workers in the industry. Between 2020 and 2021 Oregon was devastated with numerous wildfires which required all available animal resources in the state. Agencies across the entire state stepped up and ensured that the citizens and their pets were taken care of. Between emergency search and rescue and evacuation, and sheltering of evacuated animals, OACC members remained devoted and professional. As one of the smaller state associations, OACC is still attempting to standardize the education and training necessary to become an animal control or animal welfare officer in Oregon, and with the networking between other state associations and OACC, hope to accomplish this soon. Congratulations Oregon Animal Control Council, NACA is proud to recognize you and your amazing dedication and hard work to the animals and people in your community.