This award is for outstanding volunteer service. The nominee selected to win this award is someone who is not directly employed in the animal care and control field but serves in a volunteer capacity within the animal care and control field or other animal welfare-related activities. He or she will have demonstrated exceptional dedication or performed outstanding work far beyond the volunteer position’s requirements. 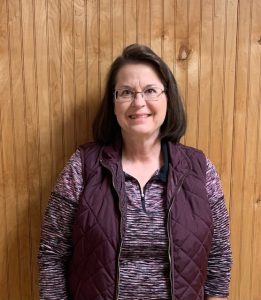 Ann’s story is one of pure action-oriented motivation! Nearly 20 years ago, before the current agency existed, Ann experienced packs of stray dogs that were constantly at risk of hurting themselves or others. They were often left injured on the side of the road to suffer a tragic end of life. Ann knew that something had to be done and it was time to act. Ann ran for City Council and was elected and by June of her first year in office, the City had animal ordinances in place, a contract with a neighboring shelter, and an ACO hired.

Ann quickly moved into the President role at a local humane society that was in a state of neglect, and the area’s animal control shelters (there are now 3 of them) were euthanizing animals at a terribly sad rate. Again, Ann knew something had to be done. She started small: a low-cost vaccination clinic. The first clinic vaccinated less than 10 animals. But, over time that built up and became self-sustaining. Then, she hosted a low-cost spay/neuter clinic and began working with the rescues and neighboring shelters to get all the animals spayed/neutered before adoption. These efforts have resulted in a 50% decrease in intake for kittens and puppies.

Ann then began to focus on finding alternatives to euthanasia in the public shelters. She worked tirelessly to secure a spot of both her animals and surrounding agencies on the PetSmart Charities Rescue Waggin which took 3 years to secure. Thanks to her efforts, Ann has pretty much single-handedly moved out THOUSANDS of animals from the community which may have otherwise been euthanized or suffered a much worse fate. But, there was still more that needed to be done.

To this day, Ann Sanders, along with her youngest daughter Amanda continue to work tirelessly to improve conditions for the area’s animals because there is no publicly funded county shelter. She supports other local animal control shelters in a variety of ways including assisting with City Council requests, supporting ACOs, providing help and guidance whenever it is needed. She’s even covered on-call for another shelter director when they had a family emergency! Ann Sanders is a true friend of animal control, one who is always there for us, no matter what we need. From her nomination: “She has cried with me, been angry with me, and helped me find justice for those animals who were abused. She will tell you that she doesn’t deserve recognition, she’ll tell you “Oh, I don’t care about that.” when asked about accolades, and it is the truth, she doesn’t care about all that “fluff” (as she calls it.) What she truly cares about is the animals, and we are so blessed that she is here for them and for us.” Congratulations Ann Sanders, NACA is proud to recognize you and your amazing dedication and hard work to the animals and people in your community.